The map below shows the various telescopes and facilities used by the 4 Pi Sky project. Hover cursor over each location for the facility name and click for further details about that instrument.

LOFAR, or the LOw-Frequency ARray, is a radio telescope constructed by the Netherlands Institute for Radio Astronomy (ASTRON) which was officially opened in 2010. Unlike traditional dish-based radio telescopes, LOFAR consists of thousands of dipole antennas grouped into 46 stations distributed throughout the Netherlands and other European countries. LOFAR is able to survey wide areas of the sky by using high-tech computing to combine the received radio signals from all these antennas. This design also means there are no physical moving parts of the telescope and hence LOFAR is completely controlled by software. This allows for swift observations and even the ability to observe multiple areas of the sky simultaneously.

A map of Northern Europe highlighting the current locations of LOFAR stations as of July 2014. Credit cynosura.nl.

Observations performed with LOFAR are at the lowest frequencies accessible from Earth. Specifically, they are within the ranges of 10-80 MHz and 110-240 MHz (the gap of 80-110 MHz is because this range is used for the broadcast of FM radio in Northern Europe), which are covered by two different types of antenna in each station named the Low Frequency Antenna (LBA) and the High Frequency Antenna (HBA) respectively. LOFAR also acts as an important pathfinder for building the future, next-generation radio telescope, the Square Kilometre Array (SKA).

A bird’s-eye view of the LOFAR station at Chilbolton, UK. The LBAs are seen in the foreground and the (covered) HBAs in the background. Credit STFC.

KAT-7 is a radio telescope consisting of seven-dishes, built to act as a prototye for the technology to be used in the full Karoo Array Telescope (MeerKAT; see below). Built in the Northern Cape of South Africa, the entire project acts as pathfinder for the next-generation radio telescope the Square Kilometre Array (SKA). KAT-7 operates in the frequency range of 1200 MHz – 1950 MHz, with each dish measuring 12m in diameter. It was completed in late 2010 and although a prototype array, KAT-7 has become a very useful scientific instrument.

Once completed in 2016, MeerKAT will be the most sensitive and largest radio telescope in the Southern Hemisphere. It will consist of 64 dishes each with a diameter of 13.5m, standing 19.5m tall and weighing 42 tons. The core of the telescope will contain 48 of these dishes all within an area of 1km in diameter, with the remaining dishes forming an outer component – for which the longest distance between two antennas will be 8km. Initially MeerKAT will operate within the frequency range of 900 MHz – 1670 MHz, with phase 2 of the telescope in 2018 introducing both a higher range, up to 14.5 GHz (14500 MHz), and a lower range, down to 580 MHz. Phase 2 will also see the addition of 7 dishes at even further distances, and eventually, MeerKAT will become part of the South African component of the SKA. 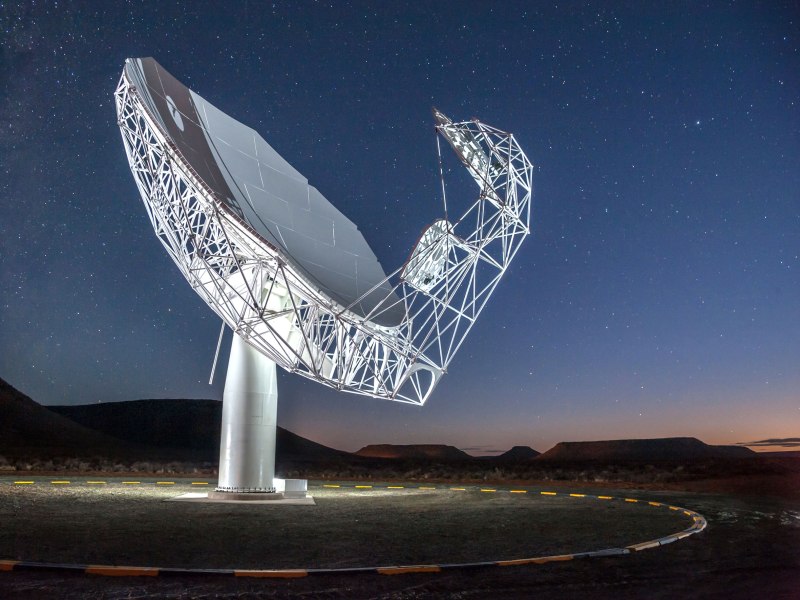 The first installed antenna of MeerKAT of which the final telescope will have 64. Credit SKA South Africa.

In 2014, we revised this programme to respond to all Swift triggers, including flare stars and X-ray binaries (Fender et al. 2015). This approach widens the scientific scope of the programme, and allows us to generate an unbiased sample of prompt radio observations of flaring gamma ray sources, irrespective their physical origin. Due to this revision of the programme, we renamed the project as the AMI-LA Rapid Response Mode, ALARRM. This is, at present, the only continuously operating radio facility with a robotic transient response mode.

The Liverpool Telescope is a 2 metres optical telescope located in La Palma, Canary Islands (Spain). It is a fully robotic, rapid response facility owned and operated by the Liverpool John Moores University. It is equipped with a wide range of instruments, including a spectrograph and a polarimeter, as well as the more commonly used photometric, multi-filter cameras. This combined with its robotic nature and the excellent observing conditions present in La Palma make The Liverpool Telescope an ideal facility for 4 Pi Sky science. On one hand, it allows one to perform deep photometric observations searching for faint counterparts of radio transients (it comfortably reaches magnitude 22th), whilst, on the other hand, it is able to provide spectra and more detailed data of brighter objects. The Liverpool Telescope is actively  being used by 4 Pi Sky, and its data have been already used in several of our publications.

pt5m is a robotic, 0.5m diameter optical telescope situated on the island of La Palma at the Observatorio del Roque de los Muchachos. It was originally built as an atmospheric turbulence monitor for an adaptive optics project for the neighbouring William Herschel Telescope. It can reach depths of 18th-20th magnitude in 2 minutes and has a rapid slew rate of 20 degrees per second, meaning the telescope can move and observe a different part of the sky very quickly. These features, along with its high availability of observing time make the telescope an ideal instrument to follow-up transient events. 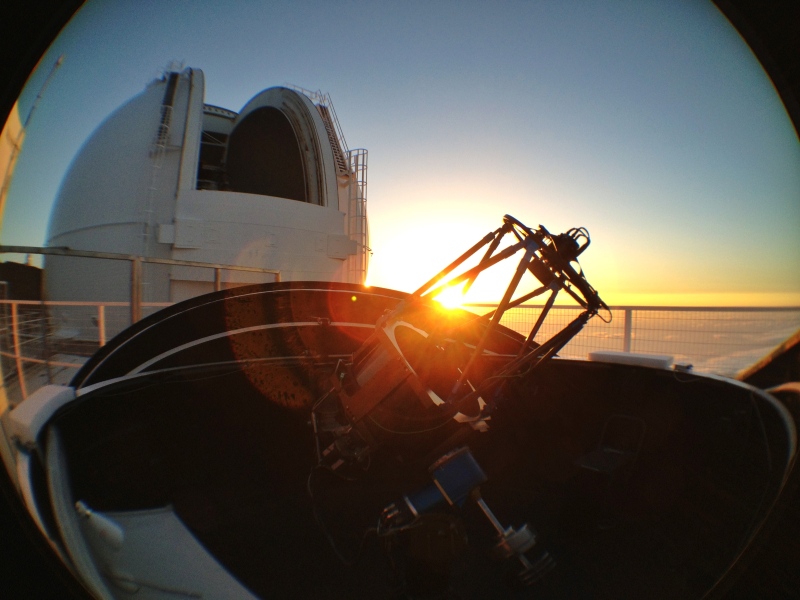 The Chandra X-Ray Observatory was launched in 1999 and uses 4 pairs of Wolter mirrors to focus X-rays onto the focal plane instruments with an angular resolution of ~0.5″ and an energy range of 0.2 – 10 keV. The sub-arcsecond resolution allows us to detect faint transients above the X-ray background and also reduce the search area for possible counterparts at other wavelengths. The equivalent of over 9 complete years of observations have been taken and publicly released on the Chandra Data Archive. With such a large amount of data it is likely that many interesting transients have been observed but not analysed as they were not the original target of the observation. X-Ray transient sources allow us to probe a wide range of astrophysics, from flare stars to X-Ray binaries and tidal disruption events. The size of the Chandra Archive provides an opportunity to search for new and unusual transients.

The Chandra Source Catalog (Evans et al 2010) provides an analysis of all Chandra sources from observations released publicly up to the end of 2009. The Source Catalog provides a variability index for every source which allows us to search the catalog for the most variable sources. The discovery of a strange X-ray transient possibly related to the tidal disruption of a white dwarf star was published in Jonker et al 2013.